TELESENSORY MACHINE FOR THE VISUALLY IMPAIRED 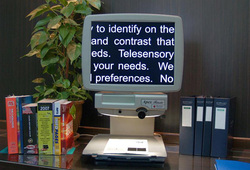 Thanks to the generosity of former Library Board Secretary Claire Beslow and her late husband Edward, the Library received the donation of a Telesensory Machine with a 19-inch monitor, which magnifies printed text for the ease of reading by patrons who are visually impaired or who just need extra help.

We invite anyone who may need such assistance to visit the Library and use the machine, which sits at the end of the row of computers on the lower level of the Library. An unexpected benefit to our community is that former Borough Historian / Archivist George Carter found the machine to be of use in deciphering the handwritten Chapin letters on which he and his interns had worked in the Local History Room.