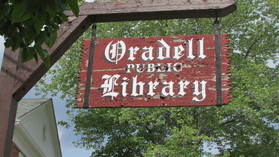 Eight eager, far-seeing, book-loving people gathered around the fireplace in the Prospect Ave. home of Miss Sara E. Tyndall one wintry night 90 years ago. The purpose of their meeting was to start a movement for a Free Public Library in the borough of Delford (as Oradell was then known).

Despite the modest size of the community, 2146 residents, these pioneers who met that 7th day of February, 1913, included several outstanding men and women. Miss Tyndall was the Principal of the Fairmount School in Hackensack. Charles Livingston Bull was world-renowned already for his distinguished animal and bird paintings. William H. Zabriskie was President of the North Jersey Title Insurance Company. Fred H. Conklin was a professional singer. J.W. Wells had been instrumental in forming the local Home and School group (forerunner of the PTA) Miss Theresa E. Gaylord was the 8th grade teacher in town.

A temporary Library Association was formed, officers were elected and they decided to apply for incorporation of The Delford Public Library Association. The necessary papers were drawn, a letter to the residents was drafted, and a constitution and by-laws were begun.

On February 28th, three weeks later, a public meeting was held in the Sunday School room of the Reformed Church. The temporary committee which had been formed outlined their hopes and plans. When Mr. Zabriskie posed the question, "Do we want a Library in Delford?" the response was an enthusiastic, "We do!"